Sometimes when people are introduced to Joe Arnold, the founder and President of St. Arnold Commercial Realty, they wonder, does this company think they are Saints…..….? For the record, the answer is no………, but we try to be. 😊

The story behind the name of the company is the result of our founder, Joe Arnold, spending nearly 20 years on Family Tree history and genealogy research. During that time, Joe Arnold traced many branches of his family back to medieval times and in some cases, as far back as 150 BC. He chose to name the company in honor of his 45 X Great Grandfather, St. Arnold of Metz, (c. 582-640 a.d.).

In medieval times, water was not very safe to drink. St. Arnold of Metz determined that as a result of the brewing process, beer was safer to drink than water. During an outbreak of the plague, St. Arnold of Metz, who had established a monastery in Oudenburg, persuaded people to drink beer in place of water. When they did, the plague disappeared. St. Arnold spent his holy life warning people about the dangers of drinking water because beer was safe and water wasn’t. Thus, he encouraged people to drink beer for health reasons. “From man’s sweat and God’s love, beer came into the world,” he would say. 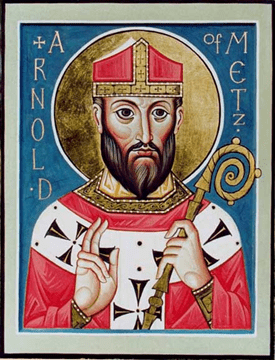 Contact Us
ST. ARNOLD COMMERCIAL © 2021 | POWERED BY: WEBPIXELPRO®
Scroll back to top